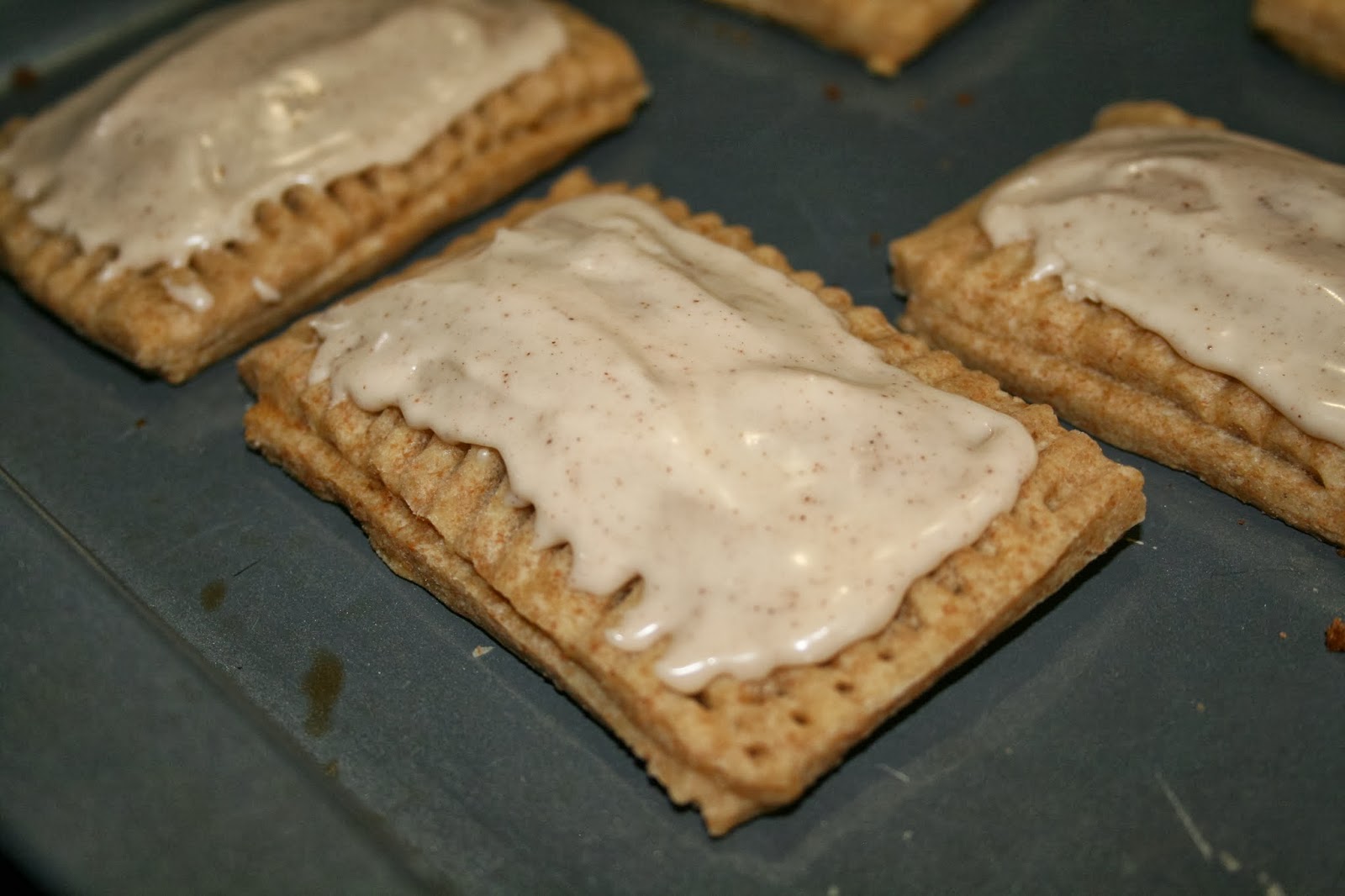 I know there has been many a mornings that my family is in a hurry to get out the door to school, to work, to church, to whatever, and we don't always have time to cook a good, healthy breakfast. Heck, I'll even go so far as to admit that on weekdays, the idea of me cooking a hot breakfast for my family is about as likely as snow in Kansas in May. Oh, wait, that's happened before... Okay, it's about as likely as a snowstorm shutting down Atlanta. No, that happened this year... okay, suffice it to say, I don't cook weekday mornings! I have made breakfast burritos that can be pulled out of the freezer and thrown in the microwave before, and when we've had breakfast for dinner we've made extra pancakes for the kids to grab in the mornings. But the majority of weekday mornings the kids are grabbing a bowl of cereal or a packet of Poptarts.

If you're big on eating natural or eating healthy most of the time, you probably steer clear of cereal, Poptarts and the majority of other popular pre-packaged breakfast foods. I don't blame you. Most of what we buy on the grocery store shelves anymore has ingredients we can't pronounce and some of those iffy ingredients are associated with heart disease, autism, cancer, and a number of other ailments! For those readers, I'm sure this would make a great occasional treat. For everyone else like me, they are a great breakfast on the go! Not to mention that when you make an at-home version of a store bought treat that is so popular, it's usually easier on the bank account as well. Especially if you shop the sales or buy in bulk.  ;-)

So I really enjoyed doing some experimenting and I think I have one of the best at-home versions of the brown sugar and cinnamon Pop-tarts, frosting and all! It's easier than you might think, and was actually pretty fun. I have to say though, one batch won't last long, so after you've tried it once and decided you love it (which I know you will), be sure to double or triple (maybe even quadruple?!?) the recipe next time. I know I'll be making these again and making a lot more of them! These will freeze well in freezer bags if you decide to make more than enough, which is exactly what I will be doing next time. I've seen some recipes that claim you can warm them in the toaster just like the store-bought stuff, but with the frosting I made, I'm a little leery of popping them in the toaster and having frosting ooze everywhere! I will say that warming them in the microwave works great, especially if you're not big on the crunch that toasters give (like me). Or, you could always do what we do most of the time- grab some and eat them straight out of the package without warming them!

Before I got started, I pulled my margarine sticks out of the fridge, but decided I didn't want to wait forever for them to warm up and soften, so I used a little trick I learned a while back: 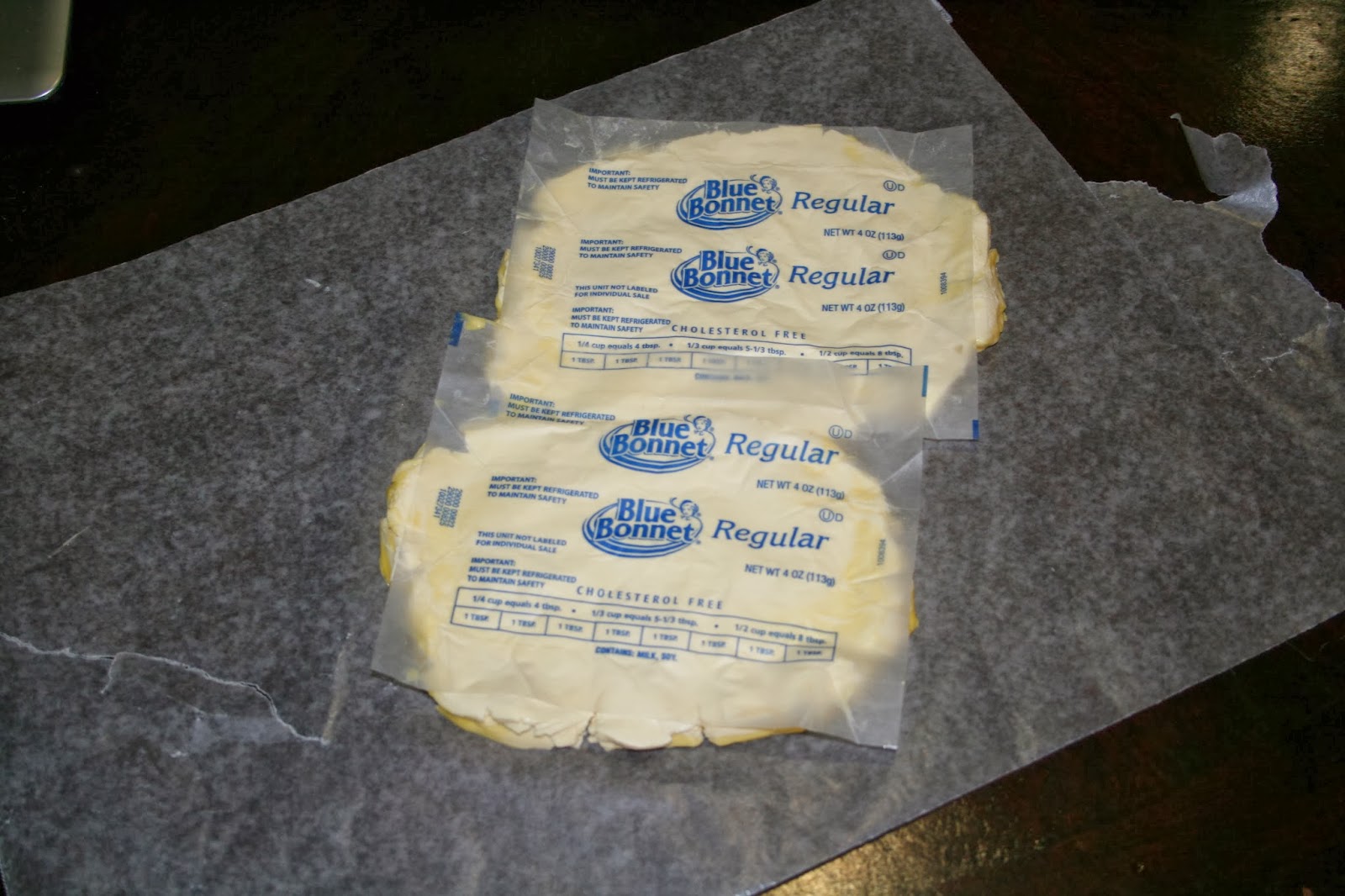 Sandwich the margarine (or butter if you use the real stuff for everything) between two pieces of wax paper. I used the wrappers and just smushed the margarine down on one piece of wax paper. The only magic at work here is science: There is a larger surface area exposed to the room temperature air, so the margarine softens quicker. Yeah, it was an aha moment for me too when I learned this!

After the margarine smushing, I preheated the oven and got the dry ingredients together. Which wasn't much, and didn't take longatall. So it really helped speeding up the margarine! The dry ingredients consist of flour and salt. That's it. Seriously. I actually used the Kitchenaid mixer I got a while back to mix these, and while I recommend a mixer for this, it's possible to mix by hand, it will just take longer. Toss the flour and salt in the mixer, and mix just until the salt is mixed throughout the flour. I used half all-purpose flour and half whole wheat flour, but you could definitely use just all-purpose if that's all you have. Add in the margarine. Another great thing about how I softened it- it still peels right off the wrapper and wax paper. I 'tore' the sheets of margarine into smaller pieces before adding them into the mixer to disperse it more evenly, but I really don't think it was a necessary step. I think that was me being a tad OCD. Mix the flour and butter until it clumps up and looks like bread crumbs. 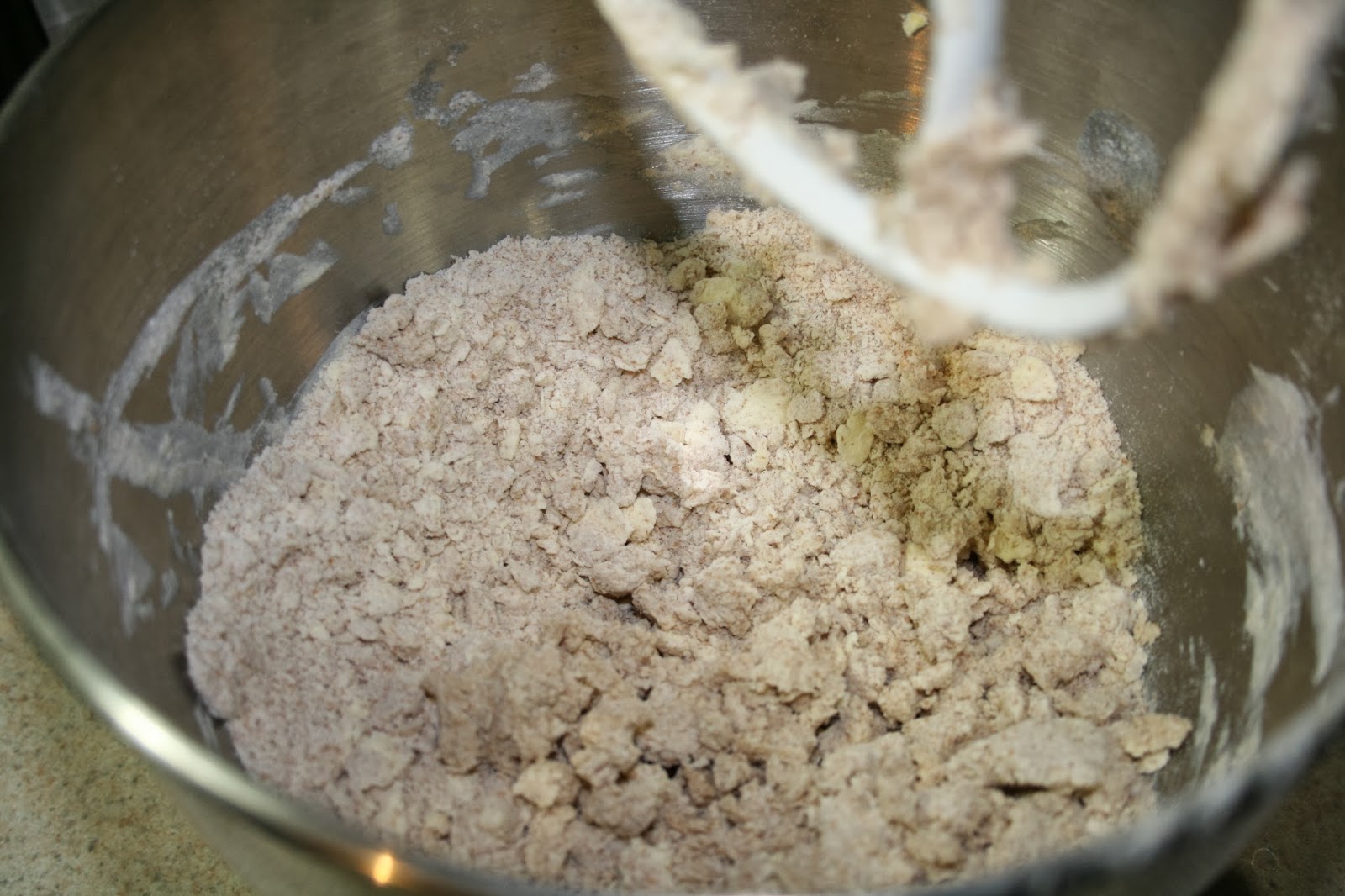 Here's where the fun starts- you'll add water just a little at a time until the dough forms a ball. I accidentally added too much and had to add a bit more flour to make up for it, but it probably would have been easier if I didn't add water as quickly as I did. Take that sticky ball of Poptart goodness out of the blender and divide it in two. Roll your first half out to about 1/8" thickness on a well floured surface. Here's where I threw caution to the wind: I just started cutting! I cut the first half into 6 rectangles, and I just eyeballed the size. Take the scraps and set them off to the side, and do the same thing with the other half. With the scraps I had left over, I was able to make a total of 18 rectangles. 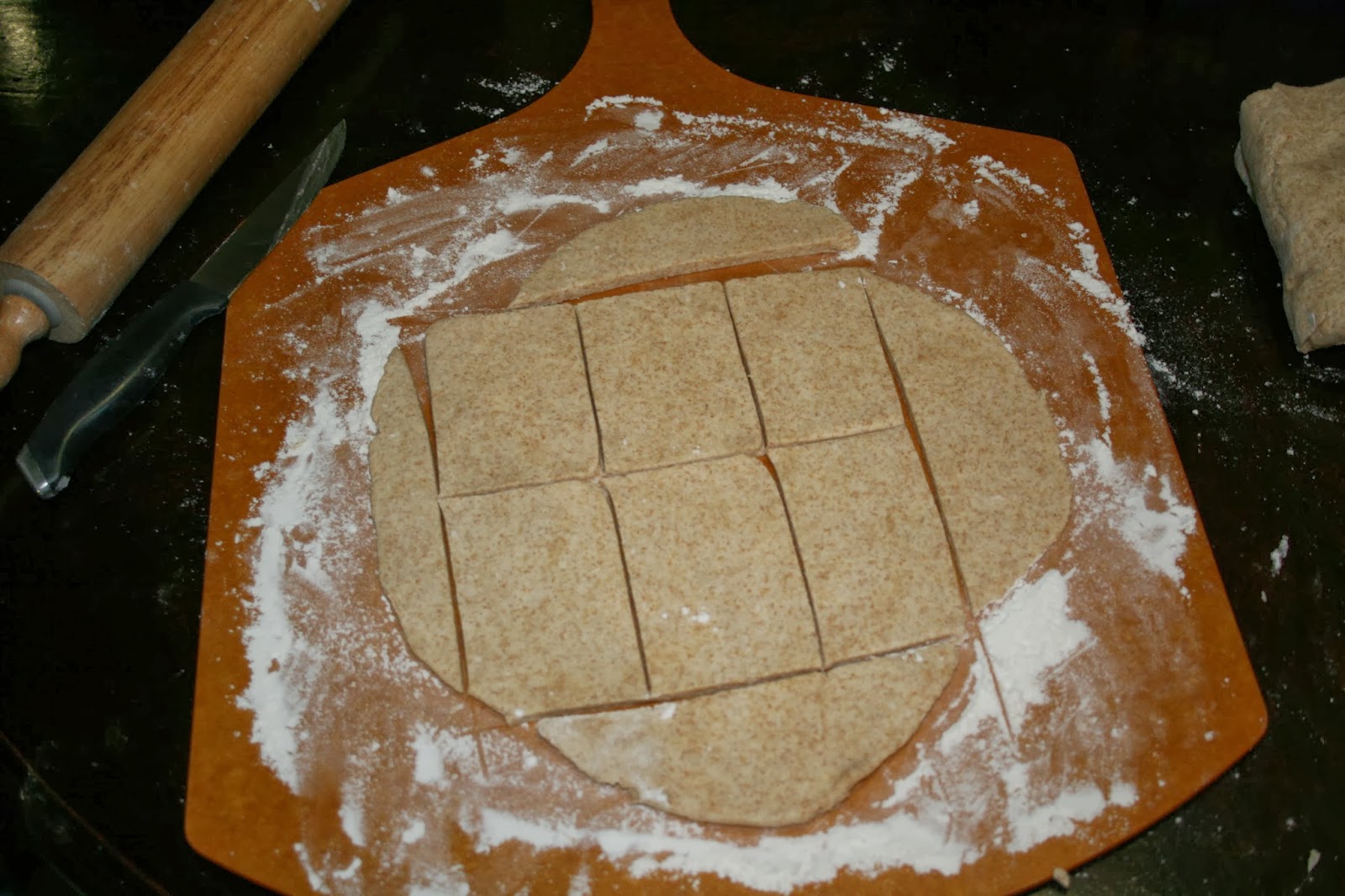 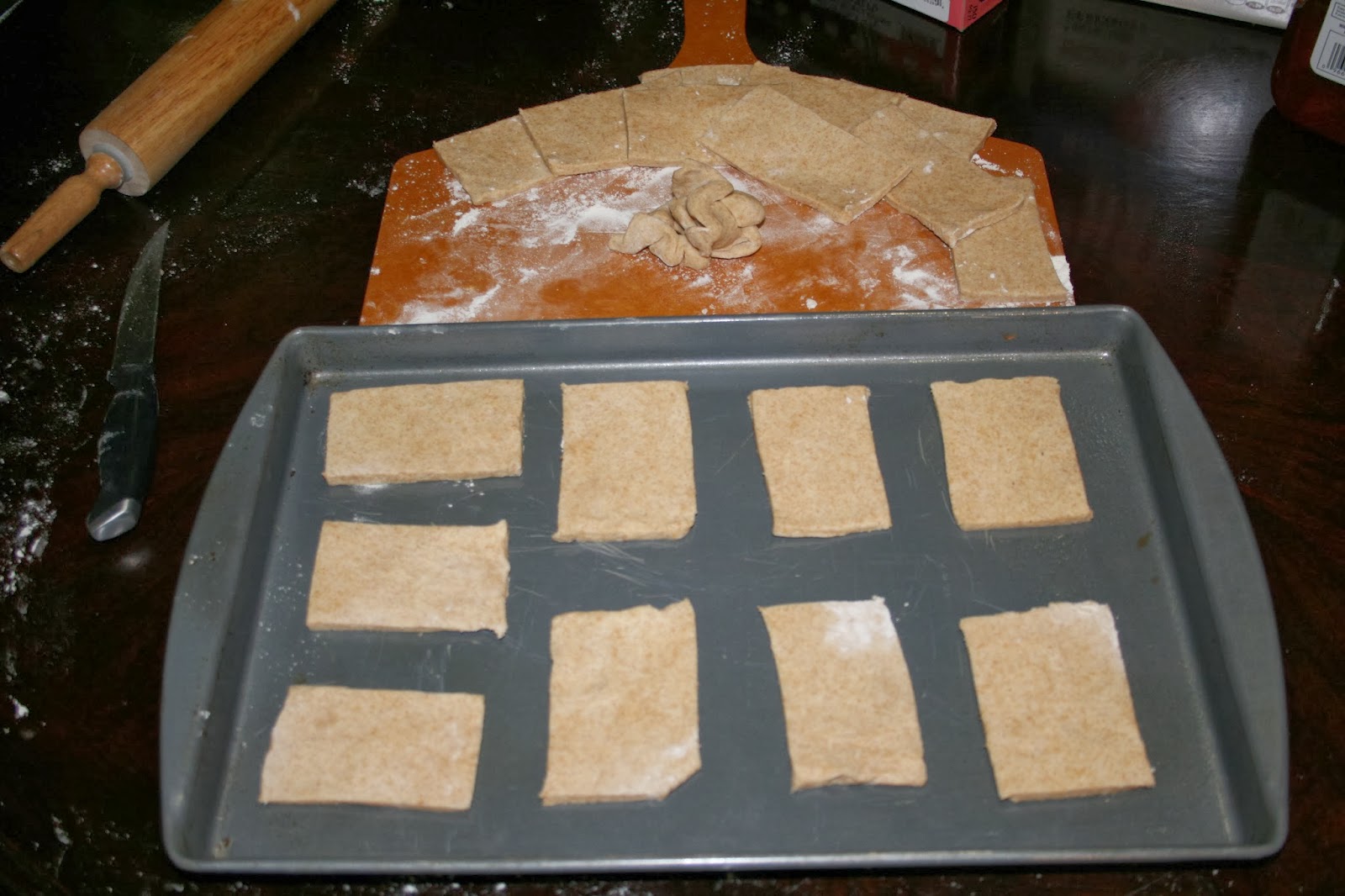 The 'guts' of the Poptarts is quick and easy to mix up: brown sugar, cinnamon and flour mixed together in a small bowl. Place half of the rectangles on a lightly greased baking sheet, and spoon a heaping pile on each rectangle. The mixture will cook down, so there's no need to be chintzy here! 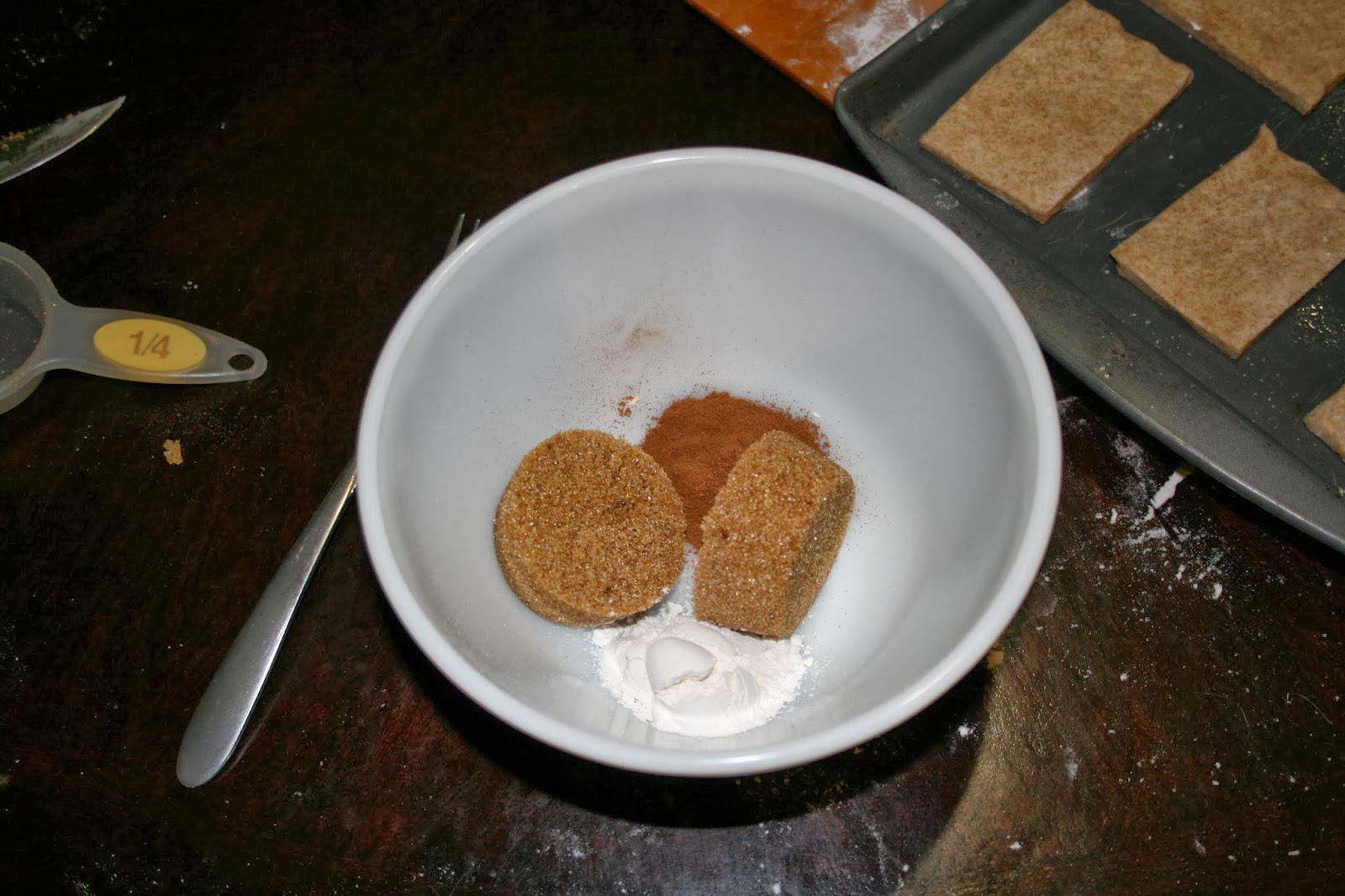 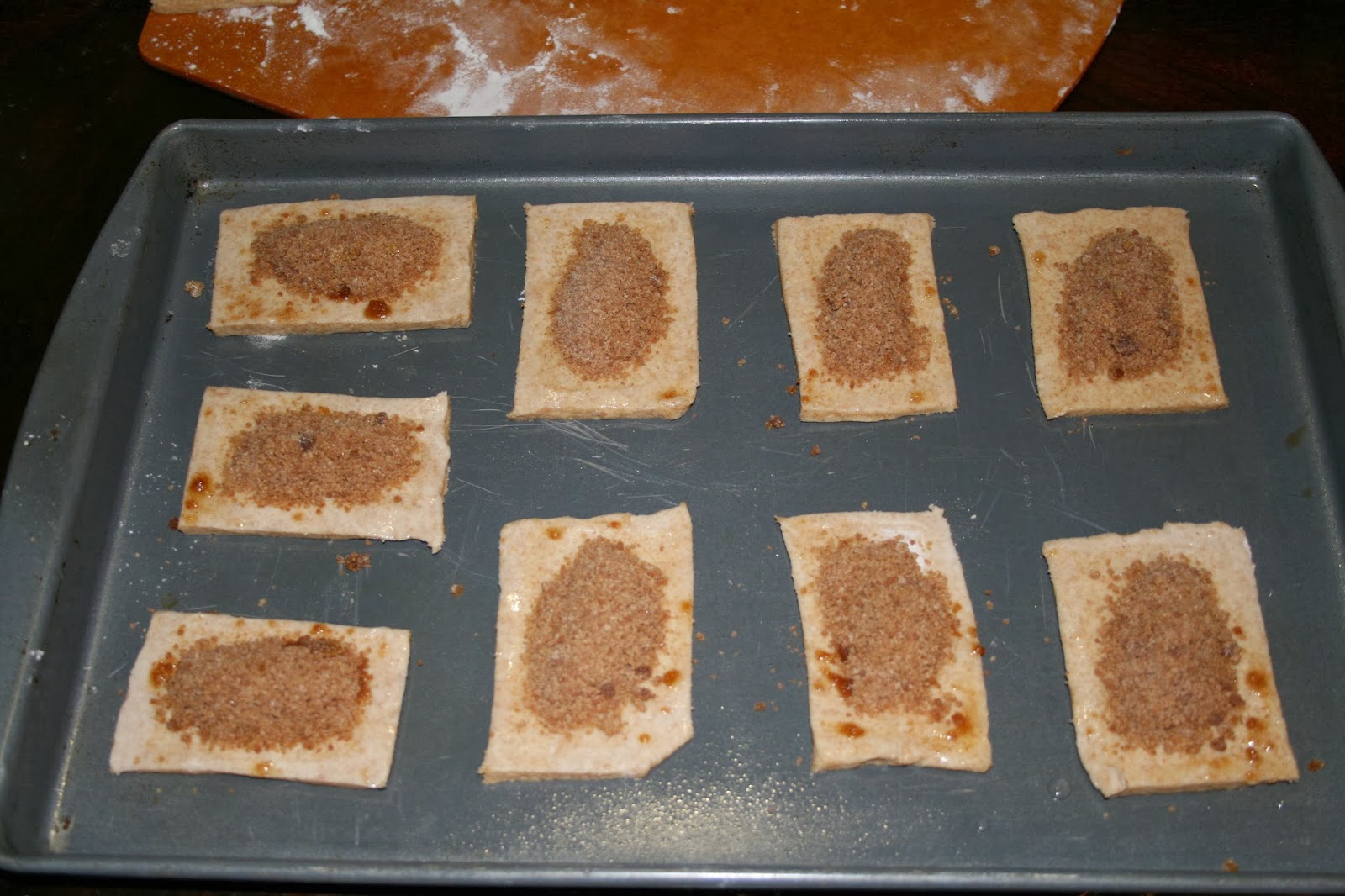 Before placing the top half of the pastry on, dampen the edges of the rectangles with water. This will help it seal as it cooks so you don't have gooey goodness seeping out onto the pan. Place the other rectangles on top, and use a fork to seal the edges. I learned at this point that this step would have been easier had I used a flat baking sheet with no raised edges- it was tough sealing the edges on the outside of the pan with the edge of the pan in the way! Make sure you poke a hole in the top for the steam to escape and prevent it from bubbling up. I just used the fork for this, and found that they looked mighty tempting like this if you want to forgo the frosting. Pop 'em in the oven and let them cool before frosting! 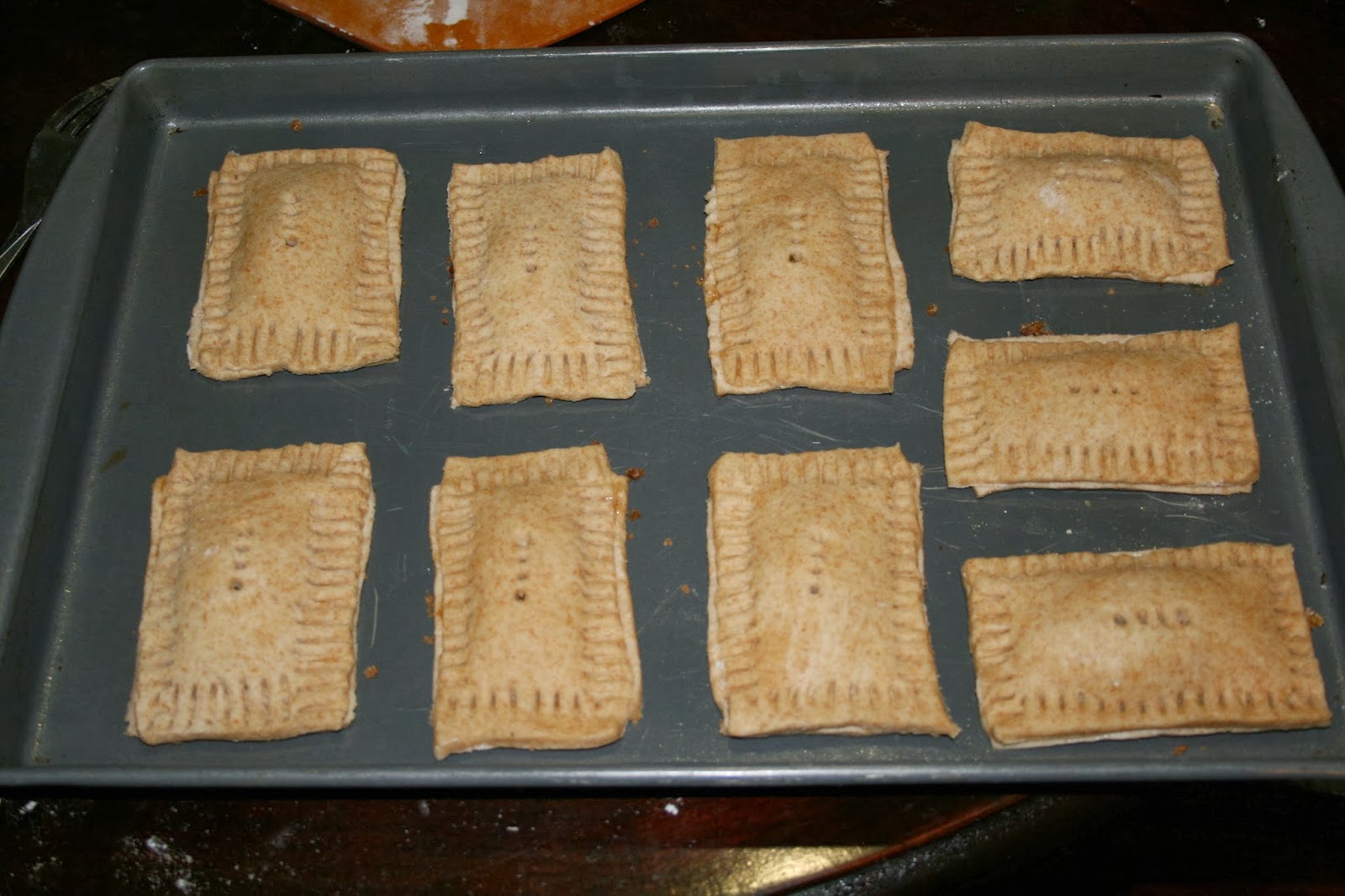 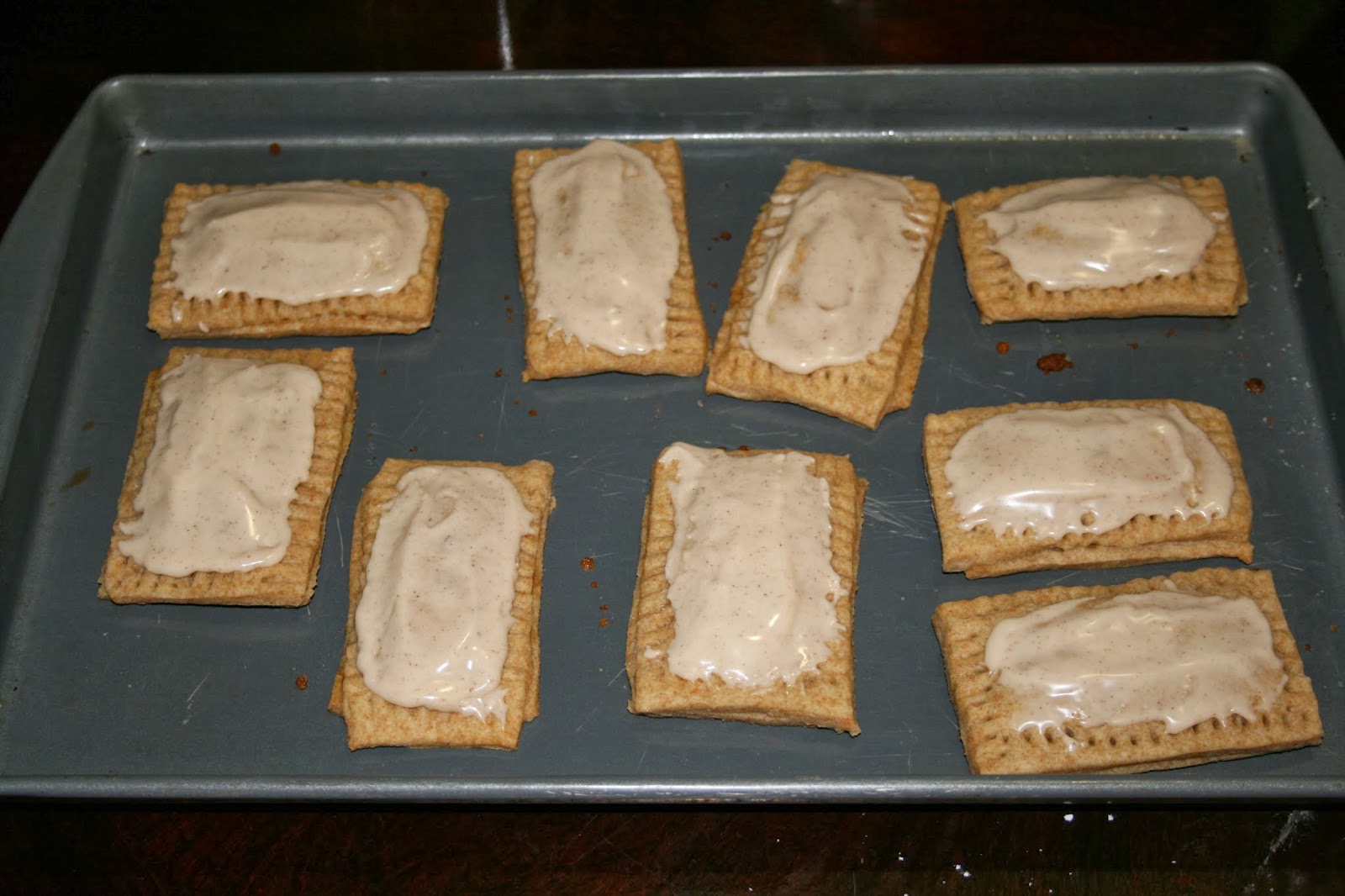 Hubs and I split one for a taste test before I packed them in sandwich bags, two to a bag, and stuck them on the shelf with the homemade breakfast bars. It was not identical to the store-bought stuff by any means. These taste fresh. They taste homemade. They taste yummy in their own way. And best of all, they don't taste like factory-produced, preservative-filled junk advertised as food! Now that I know these turned out AWESOME, I will be making them again, and I'll be experimenting with jams to make different flavors. I see strawberry and raspberry Poptarts in my family's future... It's still not a breakfast of eggs, ham, whole wheat toast and orange juice each morning, but it's a step in the right direction away from highly processed foods with unknown ingredients and harmful preservatives!

1. Preheat oven to 350°. Mix flour and salt in a stand mixer. Combine flour mixture and margarine until crumbly. Add water slowly until the dough is workable and forms a ball.
2. Divide dough in half. Roll half onto a floured surface to 1/8” thickness. Cut into rectangles (measure with a ruler for more uniform rectangles). Repeat with other half of dough, and any remaining dough scraps, making sure you have an even number of rectangles.
3. Place half of the rectangles on a lightly greased baking sheet. Spoon filling onto rectangles in generous amounts. Dampen edges of rectangles with water, and top with remaining rectangles.
4. Seal edges of the Poptarts with a fork, and pierce holes in the top of each with the fork or with a toothpick.
5. Bake for 20-25 minutes or until golden brown. Spread with Homemade Frosting for Poptarts, below. Add sprinkles if desired.
6. Store in an airtight container or plastic storage bags at room temperature, or freeze in freezer bags for longer storage.

Mix ingredients together in a small bowl. Set aside until ready to use. Any remaining filling can be stored in a plastic storage bag in a cool, dark cabinet, and should be good until the closest expiration date on the ingredients you used.

Combine all ingredients in a small bowl until it reaches a thick but spreadable consistency. Add more milk or powdered sugar for the consistency you want. Use a butter knife or spatula to frost each Poptart. *Add the cinnamon for the frosting to the Brown Sugar & Cinnamon Poptarts. For other flavors of Poptarts, omit the cinnamon.